Home PPE In The News AltPPE.net Sis. Lasher Comments on: There Is Little Evidence That Mass Transit Poses a Risk of Coronavirus Outbreaks – Scientific American

AltPPE.net Sis. Lasher Comments on: There Is Little Evidence That Mass Transit Poses a Risk of Coronavirus Outbreaks – Scientific American 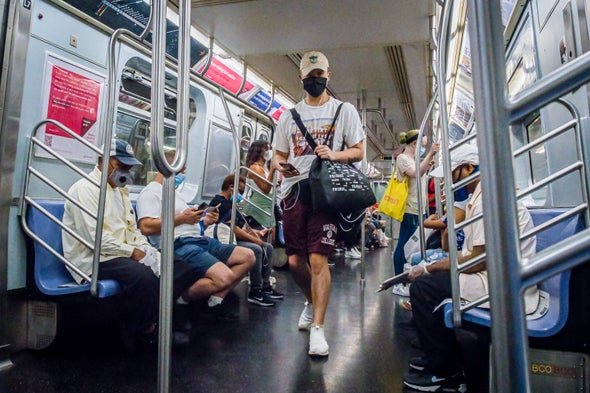 Many are asking, “Is it safe to ride the bus?”

Source: There Is Little Evidence That Mass Transit Poses a Risk of Coronavirus Outbreaks – Scientific American

What the article is saying, in a nutshell, is that as long as people are polite, masking, and distancing, there is no more risk of contracting Covid-19 on a bus or a subway than there is in any other closed space. There is no evidence of outbreaks starting in public transportation.

They do not however, say that there is no risk.

Bus drivers were some of the first to get infected in their cities for the same reason they are often harassed, shot, and have other bad things happening to them. They are the first and sometimes only line of defense in public transportation. If someone is looking for a target the bus driver is going to be the first to encounter them, and if something happens, they are the one motivated or obligated to intervene. If you live someplace where there have been incidents of unprovoked attacks and people with issues refusing to mask, or doing unhygienic behaviors on the bus, you will need to take extra care.

Where I live, in Haifa Israel, most people are relatively polite, but we do have the occasional pushy ignorant person who will behave threateningly. For some reason, most people like this are misogynists and homophobes, so they choose women and Gay men for their special attentions most of the time. Security is preoccupied with dealing with the threat of terrorism, so if one is accosted by an aggressive anti masker in the bus station, one is on their own.

We also had a problem with two specific people who are mentally ill. It isn’t their fault that those responsible for their care are not doing their job, but both of them do things like touch or pick at sores on their bodies or pick their noses and then touch the handles and surfaces in the bus.

I recommend wearing a mask, goggles or glasses/sunglasses, and gloves. Put the gloves on before you get to the bus stop. Take them off and stow them in your “hazmat” bag when you get off the bus. Put on a clean pair when you get back on the bus. Take them off and bag them after you leave the bus. At the end of the day, dispose of properly, or sterilize or at least reasonably sanitize the gloves and mask to reuse.

Blessings of good health and Ashé!